Are you in the dark after failing to get your account verified by Twitter? You are not the only one and the social network’s methods have no credibility whatsoever.

Twitter did “open” the verification process to the public in July. The Californian company provides a form and invites people to submit requests while hoping to earn the valued blue checkmark.

How to get the much-desired little badge is a bit of a mystery to anyone who has tried.

I am writing about this because I have run a football blog called Bayern Central for more than five years, focused on coverage of FC Bayern Munich, one of the biggest sports clubs in the world.

One can reasonably say that Bayern Central has tens of thousands of readers on the Web. Our Twitter account currently has 16681 followers. Marketers call that an influencer.

I tried to get verified, but on 7 August, all I got from Twitter is this email: 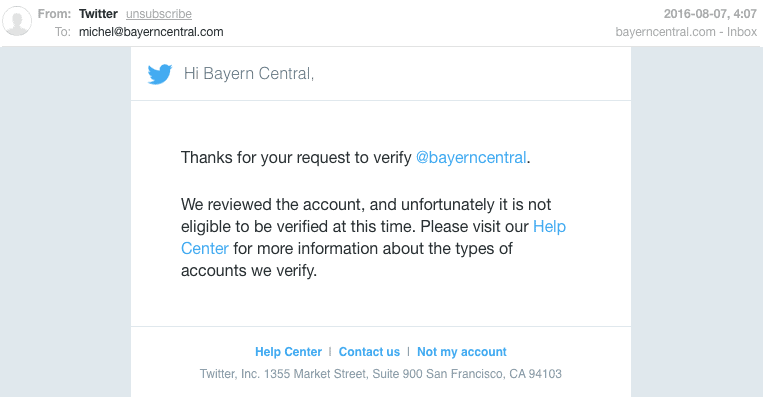 Why didn’t we get in? There are no explanations. All you get is a link to the Help Center. The document says the following:

“We approve account types maintained by users in music, acting, fashion, government, politics, religion, journalism, media, sports, business, and other key interest areas. If you believe your account is of public interest and should be verified, this article outlines information about submitting a request.”

Reading this, you find no criteria to define public interest. Is it going on TV regularly? Is it performing in front of crowds? Is it popularity by the numbers? Is it influence on a specific topic?

The rules have not been spelled out. We can only speculate.

I assume that if your are Britney Spears, you get in. If you run the account for Iron Maiden or the New York Yankees, you will also get verified. Having been a journalist for 15 years, I also know that a number of media organisations have all their reporters verified.

The curious case of @chelsea

I would also assume that if you aren’t known to anyone, you are wasting your time when submitting a request.

I AM NOT A FOOTBALL CLUB

Before I go further, let me make it clear that I am not going to attack the young woman behind @chelsea. I saw this tweet a few years ago. I retweeted it because it was funny for the football fan that I am. What is surprising is seeing the Verified checkmark on her account.

Who is she? Her description, “designer. internet girl. xoxo”, doesn’t allow to figure it out. Nor do her tweets. A look at her mentions however suggests that the only reason why she is “of public interest” is that people mistake her account for that of the Chelsea FC. For those who are not familiar, it is an English Premier League football club.

This explains the funny tweet you saw above. Now, is owning a Twitter handle that is two letters away from a known organisation’s account name a reasonable claim to fame?

The absence of written rules allows Twitter to do whatever it wants. Does your account please the Twitter staff? Does it not? The fact that @chelsea is verified suggests nothing less than favouritism.

Google and NewsNow do better

Compare this opacity to the rules of two organisations that ask publishers to go through an approval process.

First, Google News. The search giant has a well-known News page. After two unsuccessful attempts, I got Bayern Central listed as a news organisation.

How did that happen? I read and applied their guidelines for publishers. Google asks you to meet expectations with quality content (always subject to interpretation) and observation of number of technical guidelines. That’s fair.

Another example of a fair approval process is the NewsNow Publisher Network. The news aggregator provides detailed criteria. If you submit a site that complies with the requirements, you get in.

What about Twitter? 404 Not Found. The company doesn’t explain how the verification process works. It doesn’t tell you what you did wrong. It prefers to keep the rules for itself.

I will not pretend to be a social media analyst, but I believe that an opaque business culture has contributed to Twitter losing the battle for social media dominance. Facebook is bigger and other platforms grow faster for a reason.

The company fails to treat its community fairly. It provides no clarity to the new user who needs to know what the best practices are. It treats influencers as disposable.

Twitter is as impenetrable as the Berghain club in Berlin, with two differences. The first is that Berghain doesn’t have an influence on public life. It doesn’t make or break reputations. It’s also much cooler than Twitter.